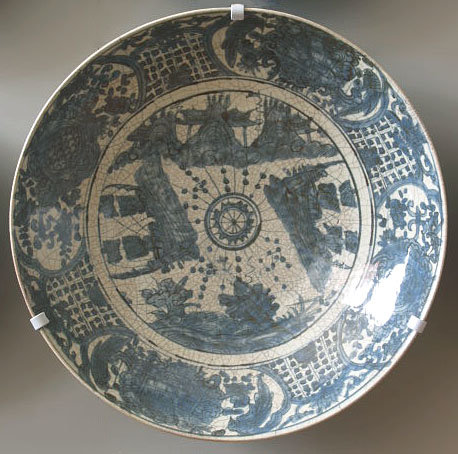 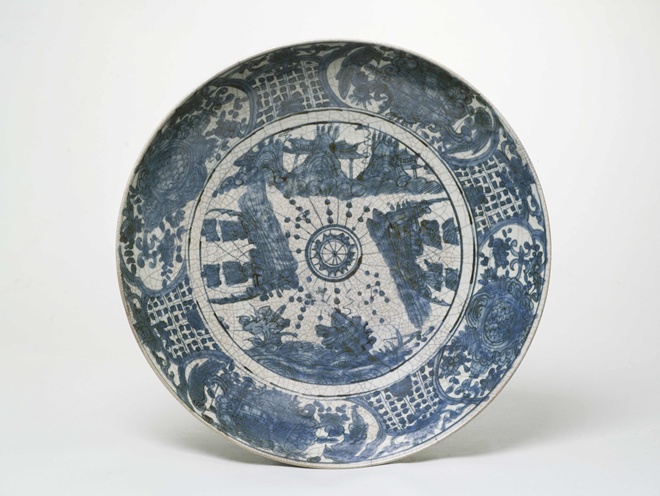 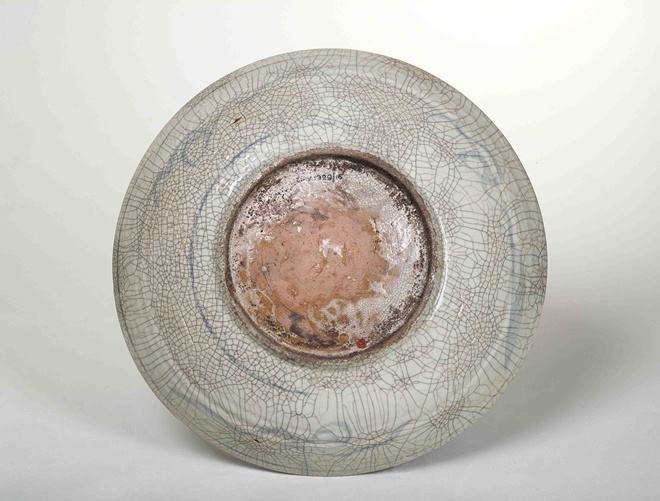 Navigation is represented on a distinct group of Zhangzhou dishes, decorated in cobalt blue and of rather big size of more than 40 cm. They have curving sides and straight edges. The centre of the design is formed by a marine rose with radiating lines. Around the marine rose are sailing ships with two masts and two tiers of sails, large fish and the elements of the Penglai islands, the islands of the immortals, represented by three mountains. A gigantic fish is leaping from the waters. The border has four oval medallions, filled with emblematic patterns.

Marine roses were not part of Chinese cartography until the 20th century; they were part of a specific Western tradition of mapping known as portulan charts. The name portulan charts comes from the Italian portolano , meaning “port” or “harbor”. They are simple maps of navigational routes across water, using compass directions Portulan charts were mapping sea routes, but did not focus on the routes on water, rather mapping the coastlines along these sea routes, going back to the documentation of places in old rutters, tracks. The earliest surviving examples of this type can be dated into the 13th century, but they were still used in the 17th century.

How the marine rose found its way into the design of this dish? It seems the Chinese at that time had seen Portuguese or Dutch sea maps, using a marine rose. An example of a Chinese sea map made around the time Zhangzhou porcelain was produced and exported, around 1600 – is the so-called Selden Map.The map shows the whole of Southeast Asia and its maritime sea routes in a scale and in a style unknown in any comparable map of the period. It was made in the end of the Ming dynasty, around 1608-1609; nothing is known about the maker. The map entered the Bodleian Library in 1654, given by the English scholar John Selden (1584-1654), as part of a large collection of more than 8000 manuscripts. It is not known, from whom or where Selden acquired this map, which now bears his name. The Selden map is oriented in usual Chinese style with north at the top, because traditionally Chinese subjects faced upwards to the emperor, who looked “down” south.

The ships sailing the sea on the Zhangzhou dish are again not Chinese junks. The type of ship dominating the global trade were the galleons and the carracks. Galleons are large, multi-decked sailing ships used primarily by the European from the 16th – 18th century. Galleons were powered by wind, using sails carried on three or four masts.
Another Western type were the carracks, caracca or nao in Genoese and Spanish, nao in Portuguese. They were three or four masted sailing ships developed in the 15th century by the Genoese for commercial purposes, and widely used by European 15th century maritime powers. The Portuguese and the Spanish used them for oceanic travel and to explore the world.

On traditional European sea maps showing the Pacific and the Indian Ocean appear sea monsters or giant fish, symbolizing the dangers of sea faring at that time. 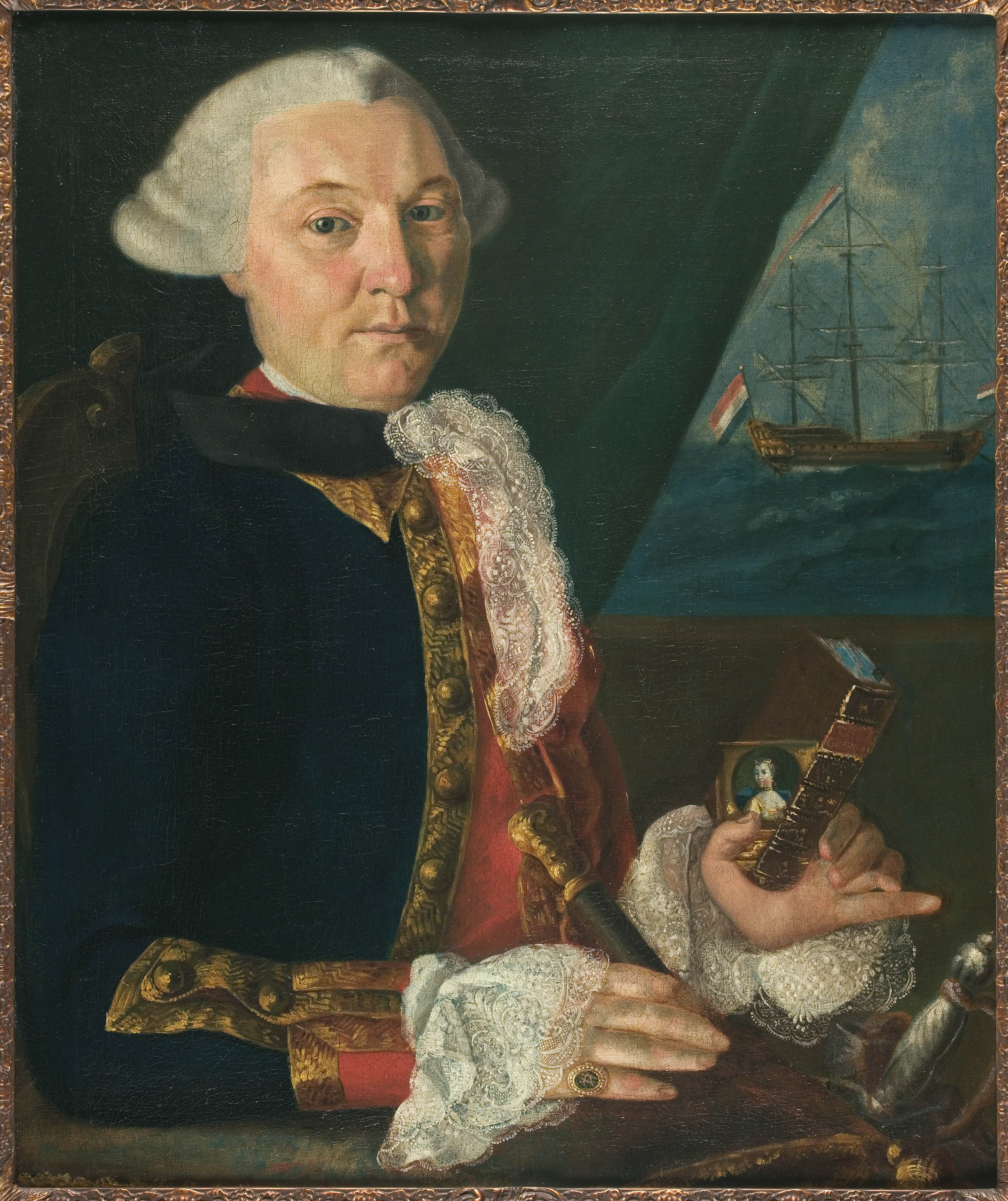 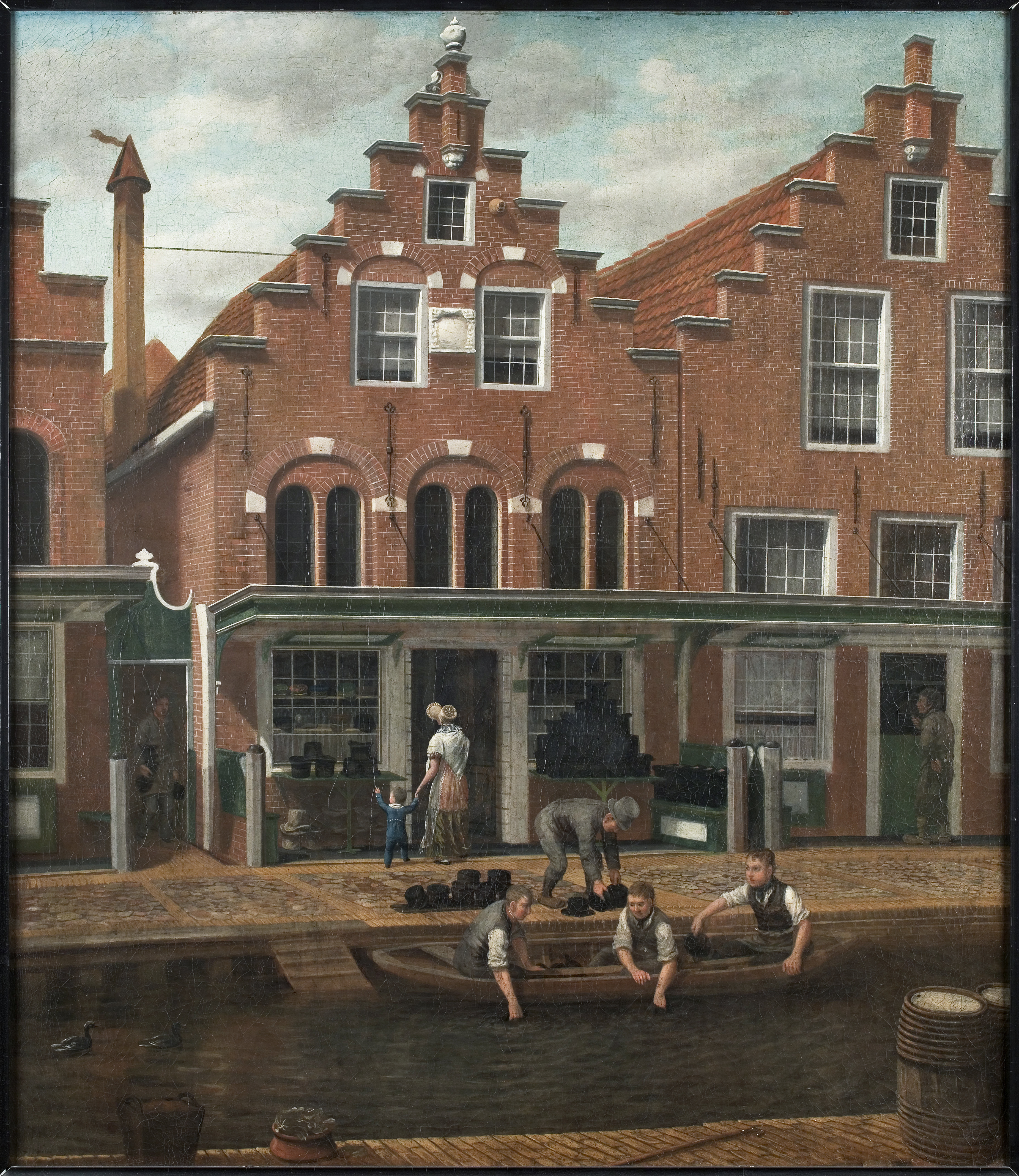 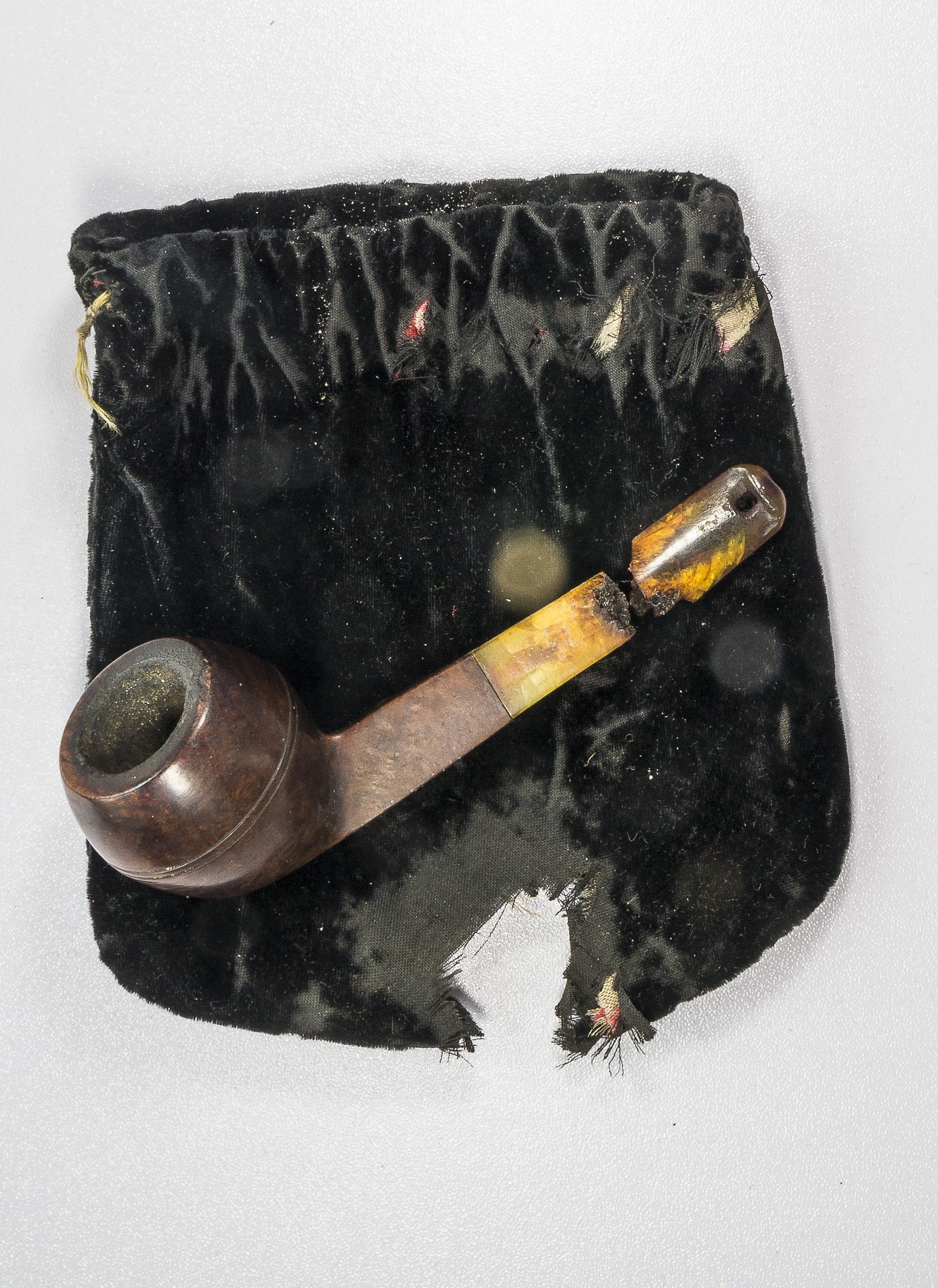 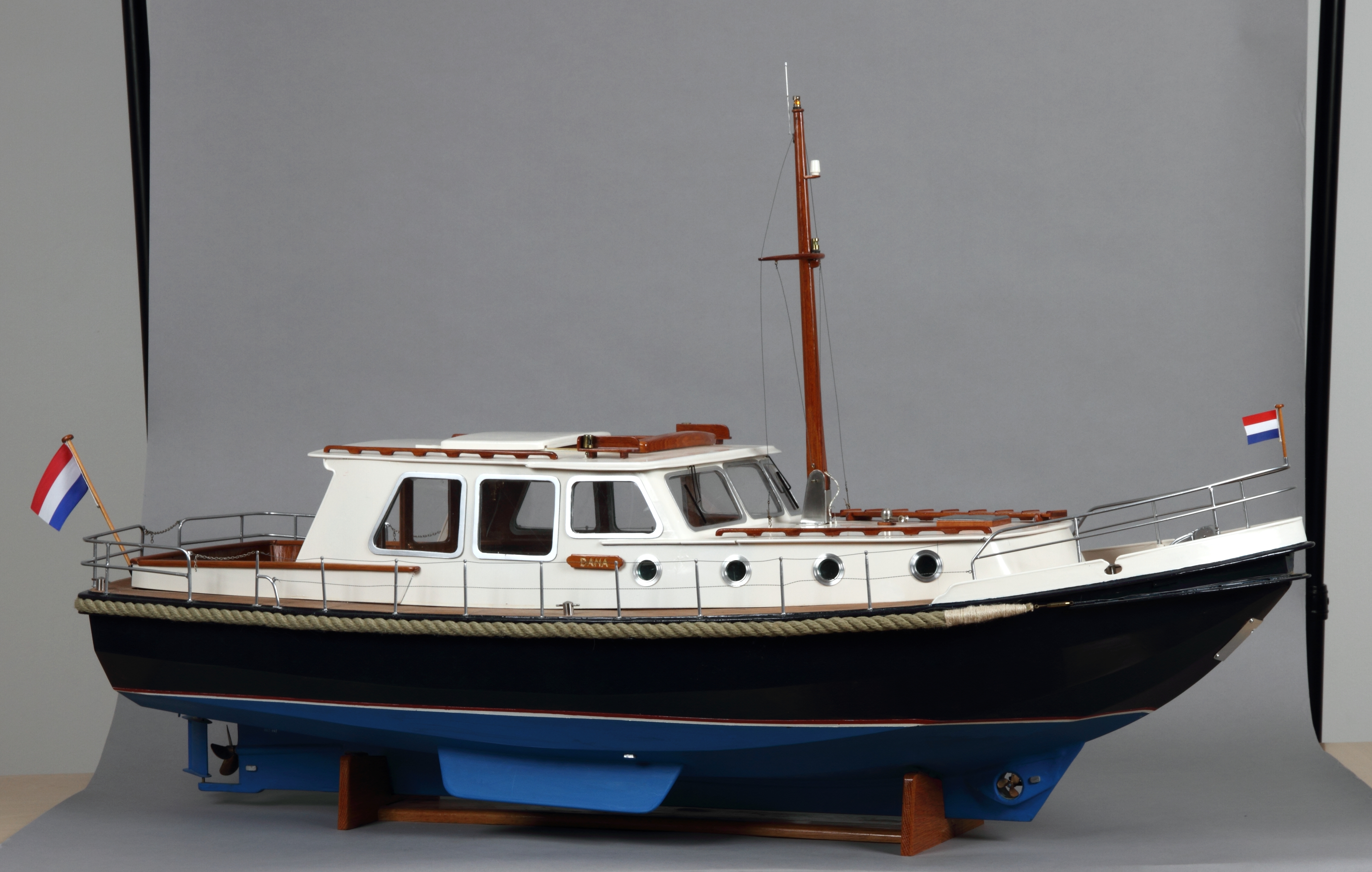